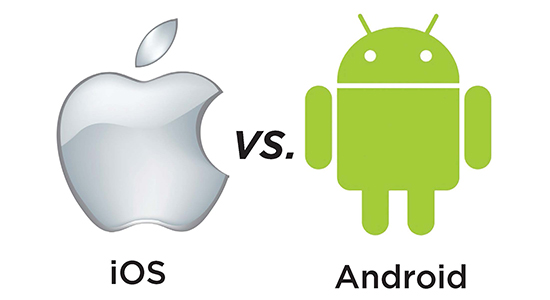 iOS vs Android: Which Smartphone is For You?

Edward vs. Jacob is a gone story, people have a new battle to fight over on social media and even in social events and that is iOS vs. Android. If you are planning to buy a new phone, you will either go with iOS or Android as both are comprising 97% of all the Smartphones shipped – Reported by IDC.

Security Provided By The OS

Hands down no question asked iPhone is the ultimate Smartphone when it comes to security. Websites like Cell Phone Deal go into detail regarding the latest risks when it comes to mobile use and how to stay safe against them, so it’s important to familiarise yourself with this. Apple is known for keeping its customers’ online privacy at their utmost priority. In a study, 97% of all malware, worms, and viruses were found in Android while less than 1% penetrated iPhone. iPhone has a military-grade encryption system in its iMessage service which allows complete security and its data cannot be penetrated.

Apple takes its customers security very seriously as the FBI paid an undisclosed amount to unlock the San Bernardino shooter’s iPhone when Apple refused to open it for them.

“We cannot guarantee that Android is designed to be safe… If I had a company dedicated to malware, I should also be addressing my attacks on Android.”

iCloud storage maybe less on the gigabytes but it surely is a strong vault to keep your online data safe and secure.

When it comes to apps, you are a bit skeptical of both smartphones. Users complain App Store offers fewer apps than Google Play, but the quantity is overlooked with quality (2.1 million vs. 3.5 million as stated in April 2018). Apps play a significant factor regarding accessories in a smartphone and Apple has restricted and limited the apps it has on its Appstore, while Googles standards regarding its apps are quite lenient.

But Apple’s restriction on its apps is a safe zone for situations where a Hoax Whatsapp App was published on Google Play which got downloaded by 1 million people before it got removed. That is a serious threat to the Operating System. Apart from that many developers have complained about the issues regarding developing apps for such a diversified range of phones.

Moreover, the enormous number of devices to support the OS (Fragmentation) makes creating for Android expensive. Hypothetically speaking, creators of Temple Run reported an issue in the early phases of the apps Android experience that almost majority of the support emails were somehow related to unsupported devices, while they support over 700 Android gadgets.

Any app which surfaces on the market lands in the Appstore first and later on Android since Android focuses on free apps like some vpn apps for android which the developers can’t cover easily making iOS win in the app factor.

Looks and hardware are what differentiate iOS and Android. Only Apple creates iPhones due to which they have strict control over the way software and hardware works. While Google offers Android the software to multiple phone makers including Samsung, LG, HTC, Motorola and now Nokia has jumped on the bandwagon. Due to the vast sales of the software, the smartphones are widely in size, features, weight and most important quality.

Top notch and pricy Android smartphones tend to compete with iPhone in terms of hardware but cheaper Android phones are keener to coming up with issues. Then again iPhone can have hardware issues as well but they are of high quality. At times it’s a bit confusing while choosing an Android device since there is a lot on the plate. You not only pick a brand but a model as well. That’s not the case with iPhone.

We can say when it comes to hardware both iPhone and Android are on a tie due to their exquisite hardware.

Integration with Other Devices

While having a smartphone, many people also carry a computer, tablet or wearable. For all these people Apple offers a simple and smart solution for integrating all the devices. Apple along with creating iPhone also focuses on tablets, computers, and watches; it provides things which Android doesn’t as it runs mostly on tablets and smartphones.

What magic Apple plays is, the continuity feature allows you to unlock your Mac through an Apple Watch, start writing a blog on your iPhone while jogging and end it at your home. Fascinating isn’t it? If we compare both the devices then Google’s services cater to Google Maps, Google Now and Gmail, all these work on all Android devices, very handy. But it makes a big difference if your tablet, smartphone, and watch are made by the same company, while there aren’t many companies apart from Samsung that make all the products under one umbrella. Of course, you can also cast your iPhone to a Sony TV with apps like Airbeam. iPhone leads the game here and Android is nowhere to be found for integrating its devices.

If you’ve used both iOS and Android, you should realize when it comes to updating the software. Android is as slow as a turtle while if you want to have the latest version of your smartphone then get an iPhone, Why? Android makers are way behind compared to iPhone to update their phones to the latest version. As soon as newer models are launched, the predecessor’s models don’t support the new upgrades of the most recent OS in Android. Apparently, that’s not the case with iPhone.

Let’s take iOS 11. It’s built-in with full support for the iPhone 5s, which came to markets in 2013. Due to its availability and functionality on older models, iOS 11 was installed on 66% of compatible models within 6 weeks of its appearance.

While speaking of Android 8, codenamed Oreo was running on 0.2% of Androids devices after 8 weeks passed of its release. Surprisingly, Android 7 was being used by only 18% of the devi ces after a year had passed of its release. What people don’t know is, the phones company is responsible for upgrading the OS and not the Operating System, and companies take ages to upgrade their OS making iPhones Operating System much better.

Do you remember playing Tekken on Gameboy? Or Nintendo and PlayStation Vita? These games ruled the way games were played until the concept changed when phones started packing with games. Apple gadgets like iPod Touch and iPhone have been ruling in the mobile gaming market with hundreds of amazing games multiply by 10 players.

The speed and the market reach of iPhone as a gaming platform as predicted by many will outreach what Sony and Nintendo have created in the game persona. Its surprising Nintendo has also started to develop games for iPhone (Super Mario Run). Since the iPod touch gaming is in serious demand by users, leading to create more powerful devices to support games as fast as being played on a gaming laptop.

The feel of creating for Android is less since the first question arising by developers is it’ll be free of cost, due to which iPhone is preferred first. The same reason has been stated by many companies who are halting the apps created for Android altogether. Being a market leader in many aspects, iPhone has to take the lead in this gaming field.

The first thing we consider in a smartphone is the amount of battery life it will provide. No matter how good the looks are if the battery sucks then it won’t last in the market. Early iPhones had a weak battery life, couldn’t last a day, but recent models can go days without the charge. While surprisingly newer OS tend to reduce battery life yet the charge remains.

With Android, that’s not the case, due to a broad diversity of hardware options, some of the Android models have 7-inch screens with more advanced resolutions taking on battery life. Thanks to the availability of multiple Android models, some of them provide ultra-long lasting batteries which can last longer than an average iPhone on a single charge.

That’s a Wrap Up

That’s not a brief overview of both the smartphones but these points are what sets apart the two. At a certain point, Loyal Android fans will overlook all these facts and so will iOS lovers just to show their loyalty towards but it all comes down to seeing iPhone rising at the top. Different people have different needs. It’s all based on what your preference is.

iOS vs Android: Which Smartphone is For You?

Jamelia Dalby
Other posts
Wednesday, 2021/11/10 - 14:33
Categories
We use cookies on our website to give you the most relevant experience by remembering your preferences and repeat visits. By clicking “Accept”, you consent to the use of ALL the cookies.
Do not sell my personal information.
Cookie SettingsAccept
Manage consent